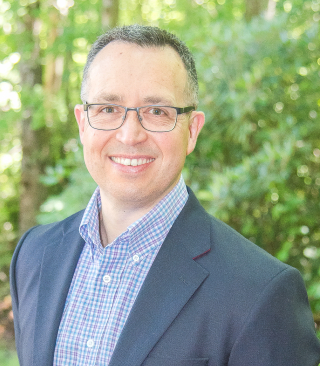 Tom and Jean call Bathgate home and have been living in Wester Inch village since 2005.

Tom is originally from Black Mountain, a small town in western North Carolina. The grandson of a Presbyterian minister, Tom grew up in a strong Christian family.  He met Jean in Chapel Hill while at university, and they got married in 1990.  That's also the year they took their first mission trip to Ukraine.

God opened a remarkable door for ministry such that, after spending several years in youth and university ministry, Tom and Jean moved to Ukraine in 1995.  They helped plant and lead several churches in cities such as Lviv and Ternopil, and today there are eight churches in western Ukraine with which they continue to work.

After planting our Edinburgh congregation in 2005, Tom and Jean were approached in 2007 by families in Wester Inch and Bathgate to explore starting a local community church. Wester Inch was just being developed and was without a church. Beginning with a couple of pizza dinners in the spring of 2008, Centrepoint Bathgate began with a few families meeting on Sunday evenings. After a local leadership team was in place in Edinburgh, Tom and Jean began to focus their ministry efforts in Bathgate from September, 2011.

Here are a few biographical tidbits about Tom: