Worthy of It All 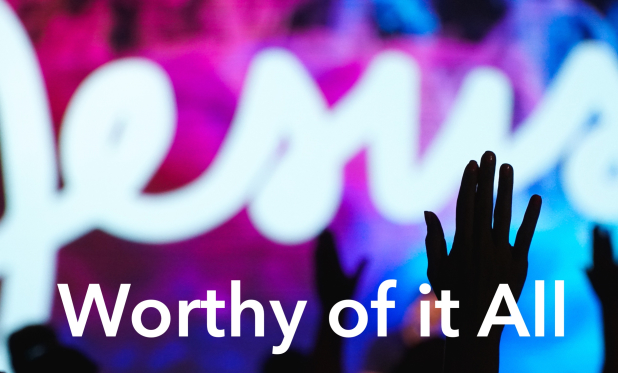 Palm Sunday is a the day when Christians all over the world reflect on Jesus’ entrance into Jerusalem at the beginning of the week he was crucified.It was a bittersweet entrance. As the descendent of David, Jesus was the rightful king, and so in a sense he is entering his city. But he knows that this city is going to kill him, and so this is a mixed entrance.

And so it’s bitter sweet in the way that different people respond to Jesus. All the gospels portray these episodes of affirmation and conflict – some people respond well to who Jesus is and what he’s doing, and others … not so much.

And life is like that. Different people respond to Jesus differently in the same way that we respond to life's other choices. We tend to be defined by choices we make, the affiliations that give us like shape. And there are key decisions in life that are quite binary:

I know that some of us feel quite deeply about these choices, but most of them make no difference in our lives whatsoever. I don’t know - and I don’t care - which side of these questions you fall on. There is really only one this versus that issue that for which the consequences matter. Jesus is either the Messiah, or he is not, and how we think about that changes our destiny. As we read in the core text (Luke 2:21-38), different people respond to Jesus differently.

There’s a misconception some people have about Jesus. It’s this idea that he was a really good teacher, he was a great miracle worker, and it’s too bad he died so young. But that misses the big point, that Jesus came explicitly for the purpose of dying.

In Luke 9:20, in response to the foundational question, 'Who do you think I am?', Peter gives the answer: 'You are the Christ'. After all of his ministry in Galilee - healing the sick, raising the dead, walking on water, turning water into win, Peter had come to understand that Jesus was the promised one, the Messiah, the one sent by God to save his people.

Then, in Luke 9:22, Jesus gave his team the gameplan for bringing the kingdom of God: “The Son of Man must suffer many things and be rejected by the elders and chief priests and scribes, and be killed, and on the third day be raised.” That wasn't real popular with the disciples, but Jesus was insistent.

And this brings us to the pivotal moment in the gospel of Luke: 'When the days drew near for him to be taken up, he set his face to go to Jerusalem'. Luke 9:51.

This gets repeated several times on the journey … but after Jesus rebukes Peter for trying to correct this, the disciples just shut about it. As they journey from Galilee to Jerusalem, Jesus is doing more miracles, he’s doing more teaching, and his fame is growing, and so the crowd is growing. Remember: everything we encounter from Luke 9 to Luke 20 – it wall all in the context of Jesus’ journey to Jerusalem.

Some folk think that the death of Jesus is unfortunate, and unecessary. Some people say, 'Well, I want the moral teachings of Jesus, or I like the power of Jesus, but I’m not really into the whole death and resurrection thing'.

In short, no. Death and resurrection are the point. His death and resurrection mattered because of his identity – it’s not just a guy up there on the cross, but the promised Messiah and the Son of God. So all the miracles demonstrate and confirm his identity. But Jesus came to go to Jersualem and die, and the entire gospel of Luke is structured around that fact.

The mount of olives is to the east of Jerusalem and looks across the Kidron valley to the temple mount. So Jesus had been in Jericho, which is in Jordan valley, east of Jerusalem, you travel up to Jerusalem, and so travelleing  west, he came to these two villages on the outskirtsw of the city, in this hilly area with olive tree groves. And in Luke 19:29-34, we read that

He sent two of the disciples, saying, “Go into the village in front of you, where on entering you will find a colt tied, on which no one has ever yet sat. Untie it and bring it here. If anyone asks you, ‘Why are you untying it?’ you shall say this: ‘The Lord has need of it.’” So those who were sent went away and found it just as he had told them. And as they were untying the colt, its owners said to them, “Why are you untying the colt?” And they said, “The Lord has need of it.”

The point of this is that Jesus is in control. But first, an explanation: this isn’t Jesus stealing a donkey; this is an example of the ancient practice of angaria in which figures of state and persons of note could press property into personal use. And this right was extended to rabbis, which is how many people now viewed Jesus.

But the key thing here is Jesus’ control over the events:

Again, Jesus determined to go to Jersualem, and here is running show. The point is that the events that happen over this next week from this Sunday to the next Friday, these are accidental, unfortunate events – this was the plan of God unfolding.

As described in Luke 19:35-36, After procuring the means of transportation, Jesus takes a ride:

This whole idea of riding the colt of a donkey is not because Jesus is tired after the journey up from Jericho. Rather, he is fulfilling an Old Testament prophecy from Zechariah 9:9:

Rejoice greatly, O daughter of Zion!
Shout aloud, O daughter of Jerusalem!
Behold, your king is coming to you;
righteous and having salvation is he,
humble and mounted on a donkey,
on a colt, the foal of a donkey.

The scripture tells Jerusalem to rejoice because the king is coming, riding on a donkey. Jesus is coming as the king who is righteous, the king who has salvation. Again, the point is – this is all going according to plan.

What happens when the king enters Jerusalem? Powerful praise erupts from those who know who Jesus is. This is what we read in Luke 19:36-37:

And as he rode along, they spread their cloaks on the road. As he was drawing near—already on the way down the Mount of Olives—the whole multitude of his disciples began to rejoice and praise God with a loud voice for all the mighty works that they had seen, saying, “Blessed is the King who comes in the name of the Lord! Peace in heaven and glory in the highest!”.

Blessed is the King who comes in the name of the Lord!

This quotation is taken from Psalm 118:26. The previous verse, 25, says, ‘Save us Oh Lord’. This is where we get Hosannah from,  a transliteration of the Hebrew hoshiana which means ‘give salvation now’. So in Psalm 118, there is a prayer for salvation, and a blessing on the king who comes in God’s name. This Psalm originally depicted the king leading pilgrims on their way to Jersusalem to worship at the temple where they would receive a welcome from the priests, probably after some great victory.

After Jesus raised Lazarus from the dead, the people had cried out, ‘Hosanna to the king of Israel!’. So the hope of the people, the point that peole are making, is that Jesus is the Messiah, the promised king. On one hand, their praise is completely appropriate, because Jesus is God’s king; He is the promised messiah. But they are being set up for dissappointment because he is not the kind of messiah they envisioned.

They pictured a political messiah who would deliver Israel from the Romans; eventually, at his second coming Jesus will destroy all oppression – all political, social, financial bondage will be eliminated when Jesus establishes his kingdom. But first, Jesus has to die so that people can enter that kingdom. They don’t know that; at this stage they are simply rejoicing in the king because he’s’ been doing good things.

What’s interesting in Luke’s account is that he does not mention any palm branches. How can you have Palm Sunday without Palms? The Palm branch had become a symbol of Jewish national hopes. Well – the reason Luke doesn’t mention this is because this he is writing to Gentiles and the Palm branches derive from a Jewish tradition, and if Luke mentioned it, he would have to explain it, like he did with the purification rite in Luke 2 when Mary and Joseph presented Jesus at the temple. Going back to a brief  period of independence between the Old and New Testaments, when he drove the Syrians out of Jerusalem, Simon the Maccabbee had been celebrated with music and the waving of Palm branches. (141 BC). When the temple had been rededicated, the people waved palm branches. The Jewish coins struck to commemorate the victory of insurgents over Romans also used palm branches. In short, these were a symbol to 1stcentury Jews of their nationalistic hopes that a messiah liberator had arrived on the scene.

But what Luke DOES mention is important: there is GREAT PRAISING because people recognise the king.

Not everyone was happy with the praise Jesus was receiving. This is what we read in Luke 19:39:

The Pharisees and chief priests and other religious leaders did not want Jesus to be their king. They did not agree with his claim to be the Messiah. And so they asked him to tell the peole to stop praising him.

This is what Jesus said: “I tell you, if these were silent, the very stones would cry out.”

Should Jesus comply with the Pharisees request? Think about this:

In the words of C. S. Lewis, Jesus is either a liar, a lunatic, or the Lord. A Lunatic could not have said the things he said. A Liar could not have kept up the charade. And plus, if he knew he was lying, he would have gone through the whole crucifixion thing. And besides, the ultimate declration that He really is Lord is the resurrection.

So Jesus says, ‘No’. He refuses to stop the Messianic confession of his followers. More than that, in Luke 19:40, “I tell you, if these were silent, the very stones would cry out.” This is a huge indictment of these religious leaders.

So here’s the thing. There were basically two responses to Jesus: praise or protest. The praise of Jesus is rooted in a revelation of who he is - the promised one, the Saviour, the Son of God, the Lord.. And the identity of Jesus is related to what he came to do:

When we understand that that's who He is and what He came to do, we praise him - loudly, boldly, powerfully. The reason people protest Jesus is because they don’t believe who is who he said is or that he did what he came to do.

Jesus is worthy of all the praise we can give him.