We'll win on Sunday. I guarantee it. 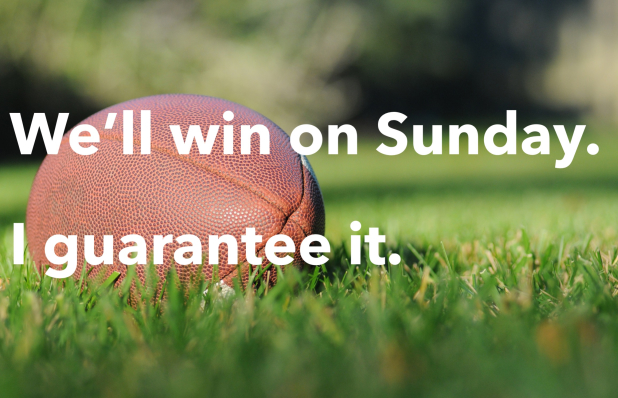 On the Thursday before the 1969 Superbowl between the New York Jets of the upstart American Football League and the expected champions the Baltimore Colts, Joe Namath was tired of answering questions.

People assumed the Colts would smash the Jets; teams from the new AFL simply didn't have the quality to go toe to toe with NFL teams. And the previous two AFL teams had been blasted by the Green Bay Packers in Super Bowls 1 and 2. But the Jets had highly-touted Joe Namath, nicknamed 'Hollywood' for his party lifestyle.

And as far as Joe was concerned, the Super Bowl was going to be a victory party of his Jets. So in a moment of frustration when someone asked yet another question about whether the Jets should even be in the game, Joe did something that's just not done in sports; he guaranteed a victory. Remarkably, he executed and led his team to a remarkable win.

From that time Jesus began to show his disciples that he must go to Jerusalem and suffer many things from the elders and chief priests and scribes, and be killed, and on the third day be raised. Matthew 16:21

Jesus told his disciples straight up that he would be resurrected. Of course, they had difficulty hearing that because of what preceded it: he must go to Jerusalem and suffer many things and be killed. Predicting his resurrection included predicting his death, and that's something his disciples didn't want to hear:

And Peter took him aside and began to rebuke him, saying, “Far be it from you, Lord! This shall never happen to you.” Matthew 16:22

Peter didn't like the whole 'go to Jerusalem and die' strategy. 'Jesus: we ran this by the marketing department, and they don't think it's such a good idea; the crowds will go down, and it's going to be difficult for you to be an effective Messiah and deliver us from the Romans if you're DEAD!'

Jesus, however, didn't have time for Peter's quibbles:

Jesus came to earth to go to Jerusalem and die. It is Satanic theology to try and minimize the importance of the cross or to limit its efficacy to a demonstration of love. The cross is God's means of dealing with the roots issues that plague humanity. But going to Jerusalem wasn't just about the cross, it was also about resurrection.

Joe Namath was a great quarterback; Jesus was a greater Saviour. Joe Namath predicted victory on the football; Jesus predicted resurrection from the dead. Easter is God's ultimate victory over death, hell and the grave. By predicting it, Jesus wanted his disciples to believe that the price tag of following was worth it. So a little confidence has some big benefit.

'We're going to win on Sunday. I guarantee it'.