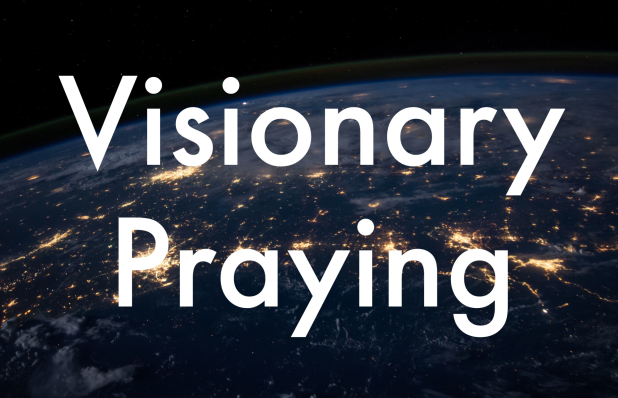 God is a visionary God, and prayer is a visionary activity. When we talk about vision, we're simply describing the preferable future God intends to create. God uses prayer to paint his vision in our hearts and empower us by His Spirit to fulfil our part in his vision. And God's vision is always about bringing people to himself through the gospel.

The story of Acts is the story of gospel growth. But it is impossible to understand the growth of the gospel from Jerusalem across the Mediterranean world as described in Acts apart from the central role of prayer. At several key junctures, prayer kept the early church on target and opened new doors for the gospel:

Following the death, resurrection, and ascension of Christ, the believers were in threat of being dispersed. Jesus had told them to wait in Jerusalem until they received the empowering baptism of God’s Holy Spirit. They were filled with the Spirit on the day of Pentecost (Acts 2:1-4) which resulted with Peter preaching a powerful sermon by which thousands of people responded to the gospel (Acts 2:41). The foundation of all this was the prayer described in 1:14:

They all joined together constantly in prayer, along with the women and Mary the mother of Jesus, and with his brothers.

Note these two key things: 1) ‘they all joined together’ – everyone was involved, it was participatory, and they were doing it together; 2) they were in prayer ‘constantly’. They didn’t assume that the necessary spiritual work got done simply because they had a prayer meeting; they kept pursuing God in prayer until they experienced what Jesus had promised. According to Acts 2:42, prayer didn’t stop after they had been empowered by the Holy Spirit; devotion to regular praying was a normal part of how they followed Jesus.

The key pastors of this new church, Peter and John, had been arrested by the religious authorities, kept in jail for a night, and then released with a threat to stop preaching the gospel (Acts 4:18). It’s an easy thing to give in to a spirit of intimidation; as Peter and John reported this threat back to the congregation, the response was to pray: ‘When they heard this, they raised their voices together in prayer to God’ (v. 24). In their prayer, they acknowledged God’s sovereignty, scriptural promises, and reaffirmed their belief that God was in control. And then they made a specific request:

Consider their threats and enable your servants to speak your word with great boldness. Stretch out your hand to heal and perform signs and wonders through the name of your holy servant Jesus (vv. 29-30).

Central to this prayer is honesty with God about what was going on: recognising that threats from powerful people can have an intimidating effect, they prayed that the opposite would be true, that God would enable his servants to speak the gospel with great boldness. Verse 31 describes the results of this prayer:

After they prayed, the place where they were meeting was shaken. And they were all filled with the Holy Spirit and spoke the word of God boldly.

God answered their prayer by filling them with the Holy Spirit (again!) such that they spoke God’s word with boldness.

Peter found himself in prison (again!), an attempt by the authorities to stop God’s word and block the gospel by silencing its primary spokesman. This was Herod’s doing; he had killed James, and Peter was on his hit list. What was the response of the believers? Verse five tells us that while Peter was kept in prison, ‘the church was earnestly praying to God for him’. This was more than compassionate prayers for a prisoner; this was praying to unleash the preaching of God’s word. And God answered their prayers: not only was Peter set free from prison, Herod the persecutor died, and verse 24 tells us: ‘But the word of God continued to spread and flourish’.

The church in Antioch was led by a multi-ethnic dream team of prophets and teachers. Two of the guys on the team were Barnabas and Paul. This leadership team spent time ‘worshipping God and fasting’ – they were gathered together specifically to seek God. There is no ‘agenda’ indicated; it seems they were simply seeking God, seeking his will, and positioning themselves under his authority for his purpose to be accomplished. As they did, the Holy Spirit spoke:

Set apart for me Barnabas and Saul for the work to which I have called them.

What do we learn from these four descriptions of prayer in the early church?

First: prayer is a normal part of following Jesus. Throughout Acts, prayer was common and assumed. The idea of a ‘prayer-less Christian' would have been incomprehensible to these Jesus followers, something akin to a 'waterless fish'.

Second: praying in groups is powerful. Even though there is an important place for personal prayer, almost all the praying described in Acts is corporate/group/team praying. Getting together with other Christians to pray is a normal part of how we follow Jesus.

Fourth: prayer precedes effective gospel ministry. In each of the examples noted, the fruit of praying was preaching, boldness to speak the word, gospel growth, or leaders sent on mission.

Five: prayer produces results. In each case that prayer is mentioned, something happens. Although communing with God in prayer is an important part of our spirituality, God calls us to pray to get spiritual work done. And as described in Acts, that work is always related to the advance of the gospel.

Drawing on all these scriptures, here is practical application for Jesus followers today: we get together with each other to pray for gospel advance with the expectation that God will answer our prayers by filling us with his Spirit and granting us boldness. And sometimes, the Holy Spirit may speak and send us on mission.