Three Encounters of a Close Kind 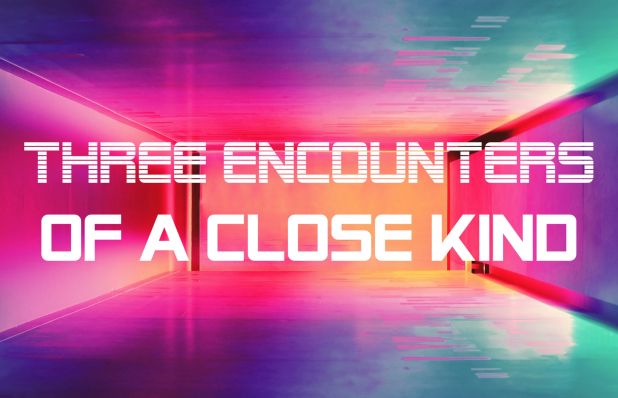 The 1981 film Chariots of Fire tells the story of the 1924 British Olympic team. They set sail from Dover, heading across the English Channel, on their way over to France, and against all odds – they were filled with audacious hope – audacious hope that they might win. It was audacious because they were competing against some great athletes, especially those big, bad Americans – Charlie Paddock and Jackson Schulz.  I’m not going to tell you the result about who won – if you haven’t seen that film – watch it!

Even though Jesus had predicted his resurrection (Matthew 16:21: From that time Jesus began to show to his disciples that he must go to Jerusalem, and suffer many things from the elders and chief priests and scribes, and be killed, and be raised again the third day), the disciples didn’t get it. After all, who has a category for resurrection?

And so, when he died and was buried, it seems like all hope had been lost. Sometimes,  it’s easier to NOT HOPE than it is to suffer the pain of hope destroyed. When we lived in Ukraine, in the early 90's, it was often difficult for us to find basis essentials. I remember driving all over the city of L'viv, looking for mince turkey. In the fa ce of these challenges, our coping mechanism was very simple:

Expect nothing, and be pleasantly surprised.

Sometimes we protect ourselves from pain by refusing to hope. And so, for example, some people hope that our current lockdown will be done in a few weeks; others are preparing emotionally for the idea that we may be in this for the long haul.

When we read the account of the resurrection – we don’t see hope, we see grief, fear, and doubt. These are some of the same emotions we have in this time of lock down:

We’re going to see that Jesus deals with grief, he deals with fear, he deals with doubt – but the resurrection is about much more than giving us a good life now – Jesus was raised from the dead to guarantee a perfect life with God in eternity.

Mary discovers the stone has been rolled away. She goes and tells Peter and John who race to the tomb, They discover the empty tomb, see the grave clothes – John believes, but they don’t yet understand the scriptures. They go back home, trying to make sense of it all.

Here’s What it Means

These followers of Jesus were not yet witnesses of the resurrection, only of the empty tomb. The empty tomb is a necessary but insufficient proof of the resurrection. It was necessary in that it demonstrates that the Jesus who was crucified and buried is the one who was raised. It was necessary in that if Jesus was raised, the tomb had to be empty. But it was insufficient in that an empty tomb by itself does not prove Jesus was raised from the dead.

God raised him up, loosing the pangs of death, because it was not possible for him to be held by it. Acts 2:24

Death could not hold him. Jesus was locked in the tomb, but he could not be locked down.  He could not be kept down. He could not be held down. This is why we can have audacious hope. The rest of this chapter describes three specific appearances of Jesus to three different people or groups who were each dealing with a different emotion.

What a beautiful moment! Mary was called Magdalene most likely because she was from the village of Magdala, a fishing village 3 miles north of Tiberius on the western side of the Sea of Galilee. Mary was part of the inner circle of Jesus; based on Luke 8.1-2, she was apparently wealthy, and with some other rich women, supported the ministry of Jesus and the disciples. But in addition to being rich, she had been spiritually oppressed. Luke describes as one ‘from whom seven demons had gone out’.

So she was wealthy, but needy. Her physical needs were met, but spiritually she was oppressed. Jesus cast out these seven demons and set her free. So for Mary, more than the grand themes of the kingdom of God which may have inspired some of the other followers of Jesus, all of this was deeply personal for her. The loss of Jesus brought her personal grief – she was hurting because she lost the one she loved, and she loved him because he had set her free.

We could imagine that a person possessed by seven demons may have been a bit of a social outcast; this could have manifest like what we might diagnose as bipolar – she could have been unpredictable in social contexts – Jesus healed her, restoring her not only to God but to healthy function in family and society. So when Jesus was crucified, she lost the one who had saved and restored her.

Here we meet the disciples on a self-imposed lockdown. Most of the disciples had not seen Jesus since they ran away from him in the Garden of Gethsemane, where he was arrested. Peter had followed from a distance and made it to the high priest Caiaphas’ house where Jesus was tried by the Sanhedrin, a court of Jewish leaders. This is where Peter denied knowing Jesus. John was the only disciple who ventured to the cross.

There’s no record of what these guys were up to on the Sabbath, but here, on the Sunday, the first day of the week, they were back together, except Thomas was not with them. The doors were locked because they feared the Jewish leaders; Jesus had warned them that they would be persecuted like he was, and they must have thought the Jews were coming for them next. Additionally, they must have been trying to understand life: they had signed up for the Messiah team, believing Jesus was going to bring the kingdom of God: they had all quit their jobs to follow him, now he was dead and gone, and what were they going to do? They were thinking that if Jesus were really the Messiah, he would not have died!

Please notice that their faith was not in the IDEA of a resurrected Jesus, but based on an actual, physical, personal encounter. He showed them his hands and his feet; Luke records that Jesus ate a broiled fish to demonstrate his physicality. The point is that the Jesus who appeared is the Jesus who was crucified. When the disciples meet the resurrected Jesus, their fear flees and they are filled with faith.

It may be that fear has crept into your heart during these uncertain times; the good news for you is that an encounter with the resurrected Lord can dispel the fear,

For some reason, Thomas was not with the disciples when he first appeared to them. Thomas was a bit of a rash disciple; he had been willing to accompany Jesus to Jerusalem, assuming they were all going to die (John 11:16). It’s hard to know what was going on with Thomas, why he was not with the other disciples.

He seems like an ‘all or nothing’ kind of disciple – he had been ‘all in’, and now the thing that he had been ‘all in’ in was all gone, and it was simply too painful for him to be with the others; that simply reminded him of all his audacious hopes that had been dashed. He refused to believe the report of the other disciples until he personally saw and touched and felt the resurrected Jesus.

Three Encounters of A Close Kind

So as we look at these three encounters – with Mary, with the disciples, with Thomas – we learn that Jesus breaks into our lives and dispels darkness of different kinds – he deals with the grief of loss, the fear of consequences, the doubt of relying on the reports of others.

And if Christ has not been raised, your faith is futile and you are still in your sins. If in Christ we have hope in this life only, we are of all people most to be pitied.

If you haven’t read 1 Corinthians 15 in a while, read it; it’s all about the resurrection of Jesus and what it means for us.

And the main thing that it means for us is a) the sacrifice of Jesus on the cross for our sins worked because Jesus is who he claimed to be, the son of God, and he so we can be forgiven. The resurrection of Jesus means that we will participate in a future resurrection.

But in fact Christ has been raised from the dead, the firstfruits of those who have fallen asleep. 21 For as by a man came death, by a man has come also the resurrection of the dead. 1 Cor. 15:20-21

Jesus has not only been raised from the dead, he has opened up resurrection from the dead for everyone who believes in him. Jesus defeated death so that we could experience life – not just a better life in this life – which we do – but eternal life of participation in the Trinitarian fellowship of Father, Son, and Spirit.

Death is swallowed up in victory.

O death, where is your victory?

O death, where is your sting?

He rose: this is why we can have audacious hope,

the audacious hope of resurrection.