The Rise, Wreck, and Restoration of Samson 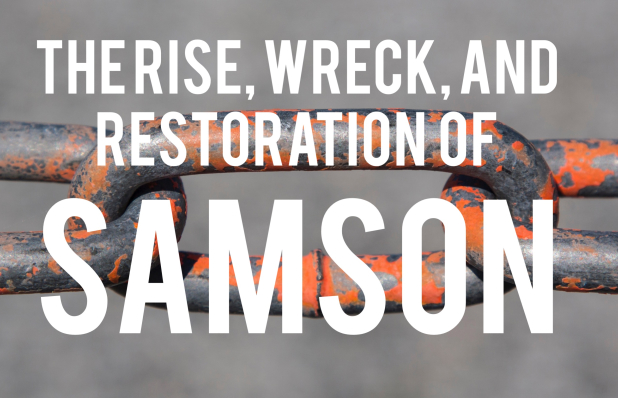 The people of Israel get progressively worse in the book of Judges to the point that when the Philistines dominate them (Judges 13:1), not only do they not ask for deliverance; they accept domination as the new normal (Judges 15:11).

Into this darkness God sends a deliverer - a broken, deeply flawed one man wrecking machine whose personal conflict with the Philistines grows into an opportunity for deliverance. Samson was blessed with physical strength (Judges 15:14-15) but made a series of bad decisions: he violated his code of consecration (Judges 14:8-9), married an unbeliever (Judges 14:1-3), in anger took personal vengeance (Judges 14:18-20). Because of his great strength, however, the Philistines were not match for him, and he set God's people free (Judges 15:20).

Prostitutes and Playing with Fire

Samson's disregard for God's law is evident in his indiscriminate sexual activity (Judges 16:1). But worse, when he fell in love with another Philistine woman named Delilah (Judges 16:4), he didn't simply set aside standards of morality; he forgot his calling. Day after day this woman enticed him, begging him to disclose the secret of his strength (Judges 16:16).

It is difficult to understand what soul fractures and character flaws prompted Samson to expose himself to such danger. Three times Delilah acted on lies told by Samson: believing he had disclosed the secret of strength, she summoned the Philistines to capture him. Why was Samson still with this woman? What was their pillow talk? 'Dear, are you going to kill me tonight?' Rather than fleeing danger, Samson built a life right on the edge. And if you play with fire often enough, you're going to get burnt one of these days.

Samson finall did tell Delilah the truth, and he did lose his strength, and she did call the Philistines, who capture him, put him in shackles, put out his eyes, and made him work at a mill while they mocked him. That's a bad day: to go from stong to weak, free to shackled, seeing to blind, and working for the enemy. In one sense, Samsons deserved it: time and again he utterly rejected the law of God. But it's still a pitiful site to see the mighty champion, humbled and subjected (Judges 16:21).

His defeated state, however, was not the end of the story. Judges 16:22 tells us that 'the hair of his head began to grow again after it had been shaved'. With the grow came the remembering, and with the remembering, the knowledge that God is good, that He forgives, and that if we call on him and turn to him, he forgives and restores.

In Samson's final feat he killed more Philistines than he had in his entire life. Though its best not to end up in Samson's predicament, the power of God's restoration is always more powerful than our capacity to mess up.

The good news for us is that many centuries later there was another Champion, One who stayed pure when temptation tried to seduce him away from his mission. Whereas Samson stood between two pillars, Jesus hung beteween two thieves. Samson prayed for vengeance on his enemies; Christ prayed for forgiveness on his torturers. Samon was restored so he could die in honour. Christ died in honour that he might restore sinners to a right relationship with God.

The good news for us is that because Jesus lived a perfect life - the life we should have lived, because he died a death in our place - the death we should have died, and because he was raised from the dead in demonstration of his victory over death, hell, and the grave - because of all that - we can be restored to God.

Whatever we have done - however we have failed - regardless of the lines we have crossed - the provision of forgiveness through the cross of Christ is bigger, better, and more potent than any human failure. God is a God of restoration: if you are far off, open your life to God and let his Spirit draws you close today.