The Power of Small Beginnings 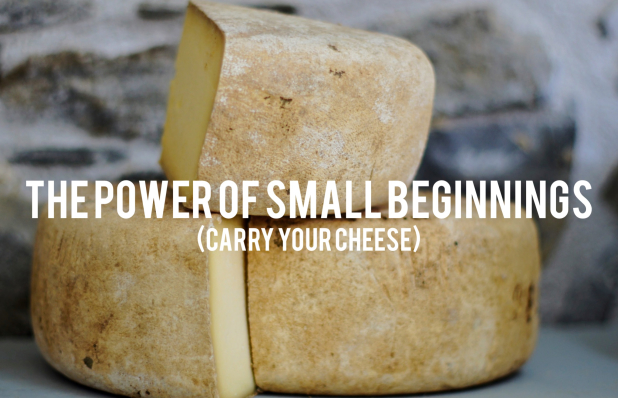 One of the greatest adventures in the Bible is recounted in 1 Samuel 17. The ending of this saga is magnificent:

David finished the task at hand; like the apostle Paul who said, 'I have fought the good fight, I have finished the race, I have kept the faith' (2 Timothy 4:7), David finished the job. And we tend to celebrate endings, because we like results. But we often don't celebrate the process - the painful, challenging, and inauspicious beginning that leads to those great victories.

If we start at the end of 1 Samuel 17, we eventully discover the beginning that led to this great ending:

In short: David's day of destiny unfolded because he was willing to embrace the mundane process of being faithful small things. David ending up toppling giants because he carried his cheese. Remember:

Faithfulness with small things positions us for moments of significnce.

When you wake up tomorrow, your diary may tell you it's an ordinary day. But what is God saying? You never know what may be in store once you take the step of walking out your door. Often, we want to arrive without taking the journey; we want to win without having to fight. Remember:

Great endings are almost always the fruit of small beginnings; faithfulness with little positions us for destiny.

The good news for us is that we have a champion who has gone before us; Jesus faithfully lived every day in light of the ultimate victory he was achieve for God's people, a victory over death, hell, sin, and the grave. By faith, we follow in his footsteps, and his victory is ours.

But thanks be to God, who gives us the victory through our Lord Jesus Christ. 1 Corinthians 15:57