The Outpouring of the Holy Spirit 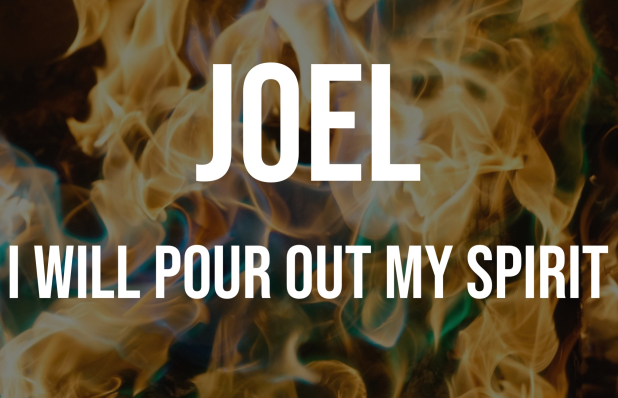 The book of Joel includes the great promise of the outpouring of God's Holy Spirit. But before we look at the promise, let's put this in a bit of context.

We know the book of Joel is set in the southern kingdom of Judah, but we don't know the specific timeframe. We learn that the nation has been devasted by a locust invasion. Now, this may seem benign, especially since skewered locust is a delicacy in china, but a locust invasion called Albert's Swarm devasted the western plains area of the United States in 1875. The size of the swarm was the size of California and consisted of over 3.5 trillion locusts.

So the context of Joel is intense calamity.

Interestingly, Joel is one of the few Old Testament books where God's people are snared by the sin of idolatry. It may be that there was no sin involved, and this was just something bad that happened. Or, it may be that they were not seeking God - they had grown complacent, and God allowed this to bring them back to their senses.

Either way, God invites them back - calls them back - to himself in a beautiful but poignant passage in Joel 2:12-14:

“Even now,” declares the Lord,
“return to me with all your heart,
with fasting and weeping and mourning.”

Rend your heart
and not your garments.
Return to the Lord your God,
for he is gracious and compassionate,
slow to anger and abounding in love,
and he relents from sending calamity.

The good news arising in the midst of this darkness is the promise of the Spirit being poured out on all people (Joel 2:28-29). Unlike Old Testament times when the Spirit came on a few people at certain times and places for specific purposes, Joel points to a time when the Holy Spirit would be experience by men and women, old and young, servant and free. God plans to do a work transcending gender, age, and class distinctions.

In a fascinating statement of clear, unambiguous prophetic fulfilment, Peter explains the events of the day of Pentest by saying 'this is what was spoken by Joel' (Acts 2:16). But that raises a question - what is the 'this'? It's what happened in Acts 2:1-4:

When the day of Pentecost came, they were all together in one place. Suddenly a sound like the blowing of a violent wind came from heaven and filled the whole house where they were sitting. They saw what seemed to be tongues of fire that separated and came to rest on each of them. All of them were filled with the Holy Spirit and began to speak in other tongues as the Spirit enabled them.

Jews who had come to Jerusalem for the feast of Pentecost from all over the Roman empire 'each one heard their own language being spoken'. Some were amazed, some thought they were drunk, but this is why Peter stood up to give an explanation. And that explanation was that this was the fulfilment of what Joel had prophesied.

The point of all this is that in the new covenant - the relationship with God opened for us through what Christ has done, there is a new dimension of God's Spirit:

A New Paradigm: rather than the Holy Spirit coming on certain people at special times for specific purposes, in the new covenant, all of God's people receive God's Spirit

A New Power: Jesus told his disciples, 'you will receive power when the Holy Spirit has come upon you, and you shall be my witnesses' (Acts 1:8). The Holy Spirit empowers God's people to witness to the resurrection.

The good news is that Jesus promised the Father would give the Spirit: If you then, though you are evil, know how to give good gifts to your children, how much more will your Father in heaven give the Holy Spirit to those who ask him! (Luke 11:13).