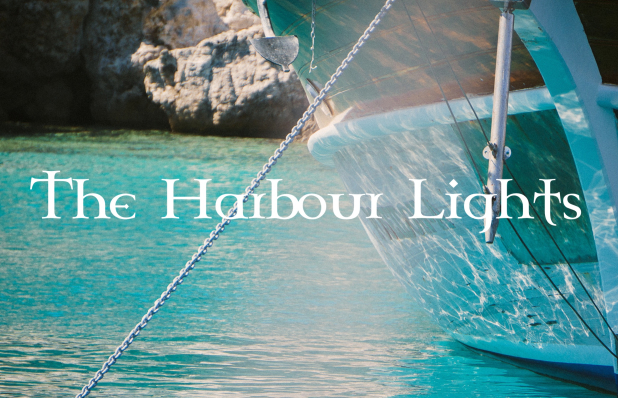 Have you ever wondered about the future? How do we know the will of God? What do we navigate life without missing God's purpose and intention?

We live in a world with too much information: there is constant, static background noise, and much of it interferes with clearly hearing from God. There is a counterfeit wisdom that dresses up like genuine wisdom but does not originate from God. Every step we take away from God, someone is there, patting us on the back saying, 'You're doing fine!'. With so many voices, how can hear God?

The good news is that God speaks clearly to his people. He promises in Psalm 32:8:

I will instruct you and teach you in the way you should go; I will counsel you with my loving eye on you.

So God promises to guide us; but how does he do so?

There is a long, narrow harbour in Italy guarded by rock cliffs on either side. Because so many ships crashed into the rockes, three harbour lights were installed at the back of the harbour. As ships approached, if they saw all three lights line up as one, they could proceed with confidence, knowing they would be led safely down the centre of the harbour. But if they drifted to the right or the left, they would see all three lights, and a course correction was called for.

There are harbour lights - or ways of speaking - through which God makes his will known to us.

First, he speaks through his Word, the Bible, which is our objective standard. As Paul writes in 2 Timothy 3:16:

All Scripture is breathed out by God and profitable for teaching, for reproof, for correction, and for training in righteousness.

The Bible is God's clear communication. The Bible is breathed out by God and is his word. It sets the parameters in which all decision-making happenes. But because we often don't like what we find in the Bible, we find loopholes, excuses, or altnerative wisdom sources. Paul, however, warns against regarding the Bible as just another book:

If anyone thinks that he is a prophet, or spiritual, he should acknowledge that the things I am writing to you are a command of the Lord.

If you abide in my word, you are truly my disciples, and you will know the truth, and the truth will set you free.

Second, he speaks to us by the Holy Spirit, which is a subjective inner witness. This can be audible, which seems to be the case with Samuel in 1 Samuel 3:10, but this is rare. All through the book of Acts God spoke by his Spirit in a way in which people a clear sense that God is leading them. In Acts 13:2, 15:28, 16:6, the Holy Spirit is acknowledged to be speaking, leading, or guiding.

And this confirms with what Jesus promised:

Nevertheless, I tell you the truth: it is to your advantage that I go away, for if I do not go away, the Helper will not come to you. But if I go, I will send him to you. When the Spirit of truth comes, he will guide you into all the truth, for he will not speak on his own authority, but whatever he hears he will speak, and he will declare to you the things that are to come. (John 16:7, 13).

What does it feel like to be led by the Holy Spirit? James says that wisdom from God 'is first of all pure; then peace-loving, considerate, submissive, full of mercy and good fruit, impartial and sincere' (James 3:17). God, by his Spirit, will make known his will to us by bringing thoughts to our minds that a) agree with the written word and b) seem right - pure, peaceful, sincere.

Third, God guides us with godly counsel - the voice of the faithful. When Paul had a revelation of the gospel, he went to Jerusalem and met with the apostles to be sure he had the right doctrine (Galatians 2:2). When there was a question about how Gentiles could become Christians, the elders met together to discuss it (Acts 15).

Seeking godly counsel is encouraged in scripture: Proverbs 11:14, Proverbs 15:22: 'In a multitude of counsel there is safety'. Sometimes, the reason we don't want counsel from faithful, believing friends is that they will hold us accountable to obey God's word.

Sometimes, we don't really want God's will; we want people to pat us on the back and tell us we're doing fine. Again, Proverbs 22:6 gives us good counsel:

Wounds from a friend can be trusted, but an enemy multiplies kisses.

The fourth light: when these three lights line up, we can move forward with confidence. But there is a bigger issue: how do we know we're in the right harbour? How do we know we're even asking the right questions. This brings us to what might be thought as a fourth light but in reality is the context in which all the other take place: the circumstances of our lives - or what we call divine providence.

In Psalm 103:19 we read that 'The LORD has established His throne in the heavens, And His sovereignty rules over all'. God rules sovereignly on earth and in our lives. This is one of the ways he makes his will known to us, and we see this all through the Bible.

When Abraham sent his servant to find a wife for his son Isaac, (Genesis 24:1-4), he prioritised the will of of God by limiting the selection to non-Caananites; he wanted a believing, not unbelieving, wife. But he gives scope to God's intervention by noting that the woman herself needs to be willing to come back with the servant (Genesis 24:8). The servant also, when he arrived in Haran, he prayed for God to bring the right woman to him (Genesis 24:11-14). And he did.

Another example of God's sovereignty is in the life of Ruth. First, Ruth was in Bethlehem because of Naomi, her mother-in-law; God brough Ruth to this town through her husband who had died. When Naomi sent her to glean in the fields, she planned to 'glean among the ears of grain after him in whose sight I shall find favour' and then 'she happened to come to the part of the field belonging to Boaz' (Ruth 2:3). And this chance encounter with Boaz blossomed into a romance, and Ruth became the great-grandmother of David the giant slayer, David the king.

Accidental? Absolutely not. God is sovereign and works invisibly through the details of our lives to accomplish his will.

So what would it look like to put all this together? Consider marriage. When it came time for me to get married, how did I get married?

1. Soverignty: First, in God's sovereignty, he had caused me to be born in an English-speaking country, in a particular stated, and I had gone to a particular university, and went to a particular church. In his sovereignty, there was a limited set of women I knew. I didn't have to pray about the girl from Madagascar or the lady from Oslo; I didn't know anyone from those places. God sovereignly limited my options.

2. God's Word: Second, the Bible teaches Christians to only marry other believers (1 Corinthians 7:39; 2 Corinthians 6:14). So in obeying the Bible, I limited the options to those who were believers. I didn't have to pray whether it was OK to marry a non-believer; it's not. God has already said so in his word. And so the set of potential partners got reduced from women I knew to women I knew who were believers.

3. Inner witness of the Holy Spirit: third, there was only one young woman for whom I felt this was the Lord's will. Over the years, I had wondered many times, 'Is so and so the one?'. But more than my feelings (I did like her!), it seemed right. I looked for the name "Jean Hallenbeck" in the Bible, and it wasn't there. But she loved Jesus with all of her heart, and she liked me. After praying about for hours and hours over many days, weeks, and months, I came to the conlusion, This is the will of the Lord.

4. Godly counsel: fourth, with something like marriage, I didn't want to make a mistake. So I sought out good counsel from two close friends and my pastor and my parents. I had always believed that at the right time God would bring the right person into my life in the right way. And as I chatted with with these sources, God used them to confirm his will in my heart.

5. Sovereignty revisited: All of the steps above would have made now difference if Jean didn't like me, didn't want to be with me, or didn't want to get married. When I asked Jean to marry me, she said yes. Eight months later, she walked down the aisle, and we got married. At that moment, she became God's perfect choice for me. This does not mean that everything that happens is God's will; it does mean that if we seek God's will through all the sources he makes available, we can move forward with confidence.

Following Jesus is a relationship, not a formula. We all hit moments in life where we wonder what God's will is. In his goodness, the Lord makes his will known to us. f we seek God's will through all the sources he makes available, we can move forward with confidence. The Lord is speaking; the best way to hear God is to adopt Samuel's posture: Speak! For your servant is listening. 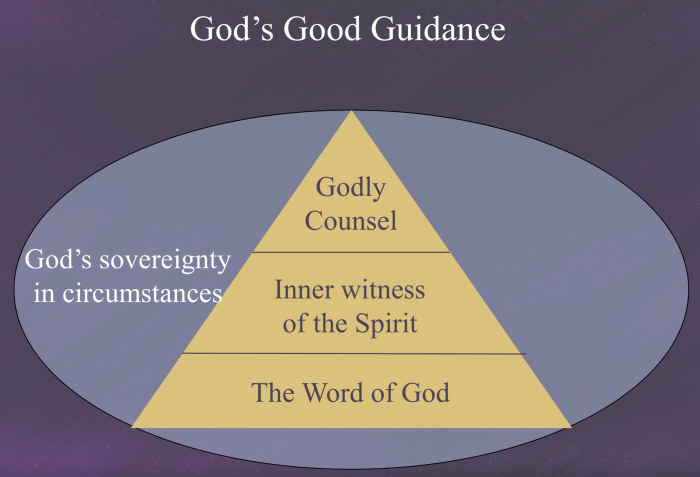