The Cave of Your Calling 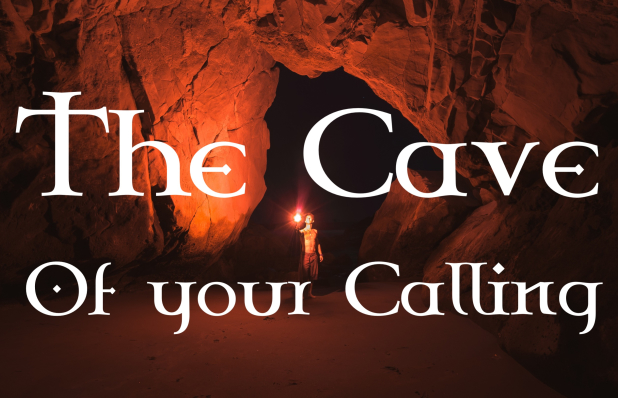 1 Kings 17 and 18 tells the story of Elijah's confrontation with Ahab. When Elijah announced, 'it's not going to rain until I say so, he wasn't simply making weather predictions; he was asserting God's authority, declaring that God is really God, and reminding the Israelites that wannabe-false-pretender-not really god they were worshipping wasn't. Elijah's victory, however, left him open to a threat.

In 2 Timothy 1:9, Paul states that we have been saved and called with a holy calling. If you have been saved, you have been called. God created you with purpose and intention; if he has saved you, he did on purpose and not by accident. God has designed your life to be a divinely woven tapestry of purpose, power, and promise. God has brought you to himself through Christ to bring you into his purpose for you life.

BUT – there is an alternative purpose at play. According to Jesus, the devil comes to steal, kill, and destroy. And if he can’t destroy you, he at least want to make you ineffective. There are spiritual forces trying to knock us off course. He will use any means possible to keep you from fulfilling your destiny. If he can, he will chase you into a cave, a place of isolation, a place where you are prevented from making any positive kingdom contribution. Sometimes, we find ourselves in a cave where question our calling in God, our identity in Christ, and our purpose in life.

It seems that we are often most vulnerable to attack immediately after a great victory. Maybe because we have been working hard and we want to take a break, maybe because we let our guard down, but we open ourselves up to an attack from the devil. This was true of Elijah, who in 1 Kings 18 accomplished a great victory when God answered his prayer by a consuming fire. The fickle crowd finally responded with confidence, The Lord He is God! It was a great moment. But into this moment came a threat.

In 1 Kings 19:1-2 we read the threat that comes to Elijah from Jezebel:

Now Ahab told Jezebel everything Elijah had done and how he had killed all the prophets with the sword. So Jezebel sent a messenger to Elijah to say, “May the gods deal with me, be it ever so severely, if by this time tomorrow I do not make your life like that of one of them.”

Elijah just triumphed over 850 prophets of Baal and Ashteroth, and now a queen says, I’m going to kill you. Elijah’s response is in verse 3-4 – he was afraid and he arose and ran for his life.  Somehow, the threat of a queen worked more powerfully in his life than the promises of God, and he gave in to fear. And he ran.

After two supernatural fastfood meals (1 Kings 19:5-8; a meal of restoration and a meal of preparation), Elijah makes his way to a cave at Mt. Horeb. Elijah ended up in a cave because he believed the threat from someone who hated god and vowed to destroy him. When we lose sight of God’s purpose in our lives, when we believe the threats of the devil, we can also run away and disengage and end up in a spiritual cave.

The 'Whys' of the Cave

Now it may be that you’re thinking, ‘I don’t know what the big deal is; I’m fine!, I’m not in a cave!’ That’s OK, take this message and save it for later. If you haven’t found yourself in a cave yet, you will.

In the cave is that we start asking WHY? Why does God let us go through this? The short answer is that God lets us end up in caves so he can get some junk out of our lives. Think about Elijah: Victory on the outside, Fear on the inside. All that time he was winning all those great victories, he was carrying all that junk on the inside: Fear, insecurity, self-reliance, impure motives, selfish ambition – there are many different things God wants to get out of lives, and caves are a great place to do it. God’s purposes are so great that these things can be a hindrance to fulfilling what God has called us to do. You don’t run a marathon in a parka and hiking boots; you get rid of stuff that slows you down. God loves us enough that he’s not going to leave us the way we are; like he did with Elijah, he’ll help us end up in a cave so that he can do some work on us.

The Lies of the Cave

Being in a cave is the perfect set up for the devil, the father of lies, to start playing with your mind.  At your lowest moment, when you feel the most lonely, he’s there to comfort you with his lies, accusations, and false truths.

Here’s the deal.  When the devil lies, you have to know how to answer his lies. The Bible promise is this:  Resist the Devil, and He will flee from you (James 4:7):

SO – there’s Elijah, sitting in the dark cave, ready to quit, ready to die.  And God comes to him and finds him. The good news is that God will find you in the cave.  He’ll have a chat with you.

But rather than saying, 'I'm afraid, I feel alone, and I ran away', Elijah talks about how great he's been:

Elijah was still not honest about his own spiritual condition.

In short, God tells Elijah, 'Your Greatest Days are ahead'. You’re going to anoint two kings and a prophet. But this is what we need to notice. Sometimes – in the cave, we feel like we need a power moment. Elijah is sitting in the cave – and he hears strong wind, an earthquake, and a roaring fire. But God wasn't in any of that.  God came and spoke to Elijah in the still small voice of a whisper.

You see – the thing we most need when we end up in a cave isn’t the power of God. We know God’s powerful. Elijah had just seen one of the most remarkable power demonstrations by God in all of history on the top of mount Carmel - and he still ended up in a cave.

What we need is to reconnect with God in intimacy and to hear his voice. We need to hear his words.  His love, his encouragement, his care. And in his Fatherly, loving whisper, he reminds Elijah that his greatest days are ahead. He commissions Elijah to anoint two Kings and a prophet. What Elijah did after the cave was greater than what he did before.

In conclusion, I want you know something:  you’re best days are in front of you. God hasn’t forgotten you. You may be hiding in a cave, you may be afraid to step out, afraid of the lies and intimidations and feelings swirling in the background.

God has more for you – more faith, more vision, more power, more anointing, more effectivenss, more fruitfulness, more faithfulness. But to access God's benefits, you need to reconnect with the still small voice of God. You are going to have to hear his words of life and love and victory.

Don't stay in your cave: reconnect with God's calling on your life through God's Word and the gentle voice of the Holy Spirit.