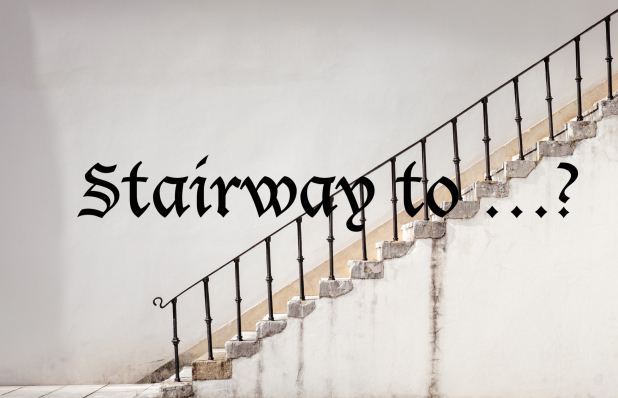 In winter 1510 the Augustinian monastery in Erfurt, Germany sent two delegates to Rome settle some dispute related to their order. While there, Martin Luther scoured the city of Rome to be sure he visited each of the religious sites; these were more important to him than the historical sites like the colisseum.

One site Luther visited is called the Scalla Sancta, or holy stairs. This set of 28 marble steps is located in a building near the Archbasilica of St. John Lateran. A tradition had grown up that these were the steps Jesus ascended when invited by Pilate for discussion before his crucifixion. Never mind that this was in Rome, and Jesus and Pilate saw each other in Jerusalem.

These steps had accumulated a grand reputation: if someone would climb the stairway in their knees, saying a ‘Our Father’ (the Lord’s Prayer) on each step, by the time they got to the top, someone in purgatory could be released from all their sins. And so Luther did this for his grandfather. But when he got to the top and stood up, he was struck with the question: ‘Who can know if these things are so?’ He wasn’t convinced it had worked.

The answer is that the only thing we can know for sure regarding forgiveness of sins is what the Bible teaches us. This is God’s definitive declaration for what we can cling to for our salvation.

In Romans 3:21-26, part of Paul’s letter to the Romans, God speaks clearly to us about how we can know if we have forgiveness from sins. Luther called this paragraph ‘the chief point . . . of the whole Bible’ because it focuses on how a sinner can be brought into a right relationship with God.  The process described in this text is justification by faith. Luther believed that this ‘article’ was vital: ‘if that article stands, the church stands; if it falls, the church falls’.[1] With the phrases sola fida (by faith alone) and sola gratia (by grace alone) the Reformers expressed their conviction that justification is, from first to last, a matter of God’s own doing, to which human beings must respond but to which they can add nothing.

21 But now the righteousness of God has been manifested apart from the law, although the Law and the Prophets bear witness to it— 22 the righteousness of God through faith in Jesus Christ for all who believe. For there is no distinction: 23 for all have sinned and fall short of the glory of God, 24 and are justified by his grace as a gift, through the redemption that is in Christ Jesus, 25 whom God put forward as a propitiation by his blood, to be received by faith. This was to show God's righteousness, because in his divine forbearance he had passed over former sins. 26 It was to show his righteousness at the present time, so that he might be just and the justifier of the one who has faith in Jesus.

v. 21: But now the righteousness of God has been manifested apart from the law, although the Law and the Prophets bear witness to it

First, notice that this is the end of an era and the start of something new: but now (cf John 1:17). Second, notice righteousness, a key theme in the gospel, which here means the saving righteousness of God revealed in the gospel. Third, notice that God has brought this about (manifested) outside the confines of the Old Covenant, although they point to it.

v 22:  the righteousness of God through faith in Jesus Christ for all who believe.

v. 23: For there is no distinction: for all have sinned and fall short of the glory of God

First, notice that this applies to to everyone – both Jews and Gentiles, religious and irreligious; all social standings, all ethnicities. Second, the shared human condition is that all have sinned (aorist tense – sinned in the past). The Greek word used here for sin is hamartema and means ‘to miss the mark’.  The picture is that of an archer aiming for a target one hundred meters away; if he misses the target, he has sinned.  At its root, “sin is any failure to conform to the moral law of God in act, attitude or nature.”[3] Third, notice that along with having sinned, all fall short (present tense – sterounti – are lacking) of the glory of God.  The mark for which we are aiming is God’s glory (doxa); God’s glory has to do with his magnificent presence and perfect character (Isaiah 35:2).  A return to sharing this glory will be the ultimate result of salvation (Romans 8:29.

v. 24: and are justified by his grace as a gift, through the redemption that is in Christ Jesus

First, notice the who of justification: whoever believes, from v. 22. Who is this verse describing? Although in v. 23 the ‘all’ is truly descriptive of everybody, not everybody is justified.  Therefore, the appropriate answer to ‘who’ is anybody (implying lack of particularity) that believes.

Second, notice the what of justification: Justification (Gr. dikaioo)  does not mean ‘to make righteous’ (in an ethical sense) nor simply to treat as righteous (though one is really not righteous).[5]   “This is ‘no legal fiction’ but a legal reality of the utmost significance; ‘to be justified ‘means to be acquitted by God from all charges that could be brought against a person because of his or her sins.”[6]  In Jewish theology, one had to wait until the last judgment to receive their judicial verdict.  In Paul’s theology, the verdict of ‘not guilty’ is rendered the moment a person believes.  The reason this is not a legal fiction is because God really counts (imputes) the righteousness of Christ to us (see Imputation in Systematic Theology section below).

Third, notice that this is by his grace as a gift.  The Point: God’s justifying verdict is totally unmerited.  We are justified freely by his grace (χαρις – charis).  By grace, Paul is emphasizing the fact that justification is rooted in nothing we bring to the table; grace describes how God has acted in Christ, God’s justifying verdict is completely unmerited.  People have done, and can do, nothing to earn it.

Fourth, notice that justification happens through the redemption that is in Christ Jesus. In biblical theology,  redemption, is most thoroughly expressed in the deliverance of God’s people from Egypt.  Thus, in the Old Testament, believers are called to look back to that event as a reminder of their covenantal relationship with God.  In the New Testament, the use of redemption always has the Old Testament background as an undergirding idea.  Redemption basically means ‘liberation through payment of a price.’  In 1st and 2nd century B.C., redemption referred to ransoming of prisoners of war, slaves, and condemned criminals.  ‘Human beings pay nothing to receive God’s righteousness; the freedom of justification, however, involves a cost on God’s part, for it was obtained “through the redemption that is in Christ Jesus.”’[7]  Additionally, as Paul uses it here, redemption involves the idea of sacrifice, because in the next verse (25) he refers to blood, and thus brings in the idea of sacrifice.  Sacrifice involves the payment of a price (e.g., the blood of the animal in the Old Testament). This connection between redemption and price paid (the blood of Jesus) is confirmed in other New Testament passages like Ephesians 1:7:  In him we have redemption through his blood.

Fifth, notice that all of this is in Christ Jesus. Jesus is the redeemer; it is through his work on the cross that we are redeemed.  Thus, 1 Corinthians 1:30 says ‘And because of him you are in Christ Jesus, who became to us … redemption’.

v. 25: whom God put forward as a propitiation by his blood, to be received by faith. This was to show God's righteousness, because in his divine forbearance he had passed over former sins.

First, notice that it is God who took the initiative by putting Christ forward. This was the willing act of both Father and Son rooted in the eternal covenant (Hebrews 13:20).

Second, notice that Christ was put forward as a propitiation. Not only are we redeemed by Christ, but he also serves as a propitiation through his blood.  Propitiation (Gr.  hilasterion) means the turning away or appeasing of the wrath of God.  The Greek word hilastarion, translated here as propitiation, is translated as mercy seat in 21 of its 27 occurrences in the LXX.  This imagery gives us a huge appreciation for what Jesus did:  Christ is simultaneously the priest, victim, and place where the blood is sprinkled.  He is the place where believers meet with God; it is the sprinkling of his blood that enables this meeting to happen.  And it is his blood that turns away the wrath of God.  As demonstrated in Romans 1 – 3 (1:18, 2:5, 3:5-6), God’s wrath is his holy, righteous, and appropriate response to human sin.  God himself took the initiative to satisfy and appease his own wrath.  “God’s righteous anger needed to appeased before sin could be forgiven, and God in his love sent his Son (who offered himself freely) to satisfy God’s holy anger against sin.”[8]

Third, notice that the mans of accomplishing the propitiation of God’s wrath is the blood of Christ. “As in other texts where Christ’s blood is the means through which salvation is secured (Romans 5:9, Ephesians 1:7, 2:13, Colossians 1:20), the purpose is to designate Christ’s death as a sacrifice.” The reference  to blood in connection with propitiation also calls to mind the Passover whereby blood on the door turned away God’s judgment (Exodus 12).

Fourth, notice that the benefits of salvation are received by faith. Faith is the means by which we appropriate the benefits of the hilasterion by his blood.  We believe the promise that is held forth for us in the propitiatory work of Christ. Because justification is a gift, the word receiving implies that the work is God’s, not ours.

Fifth, notice that God demonstrates his own righteous character by putting Jesus forward as a propitiation. In the age prior to the cross, the period of time before the redemption Christ accomplished, God ‘passed over former sins’ in the sense that God “postponed the full penalty due sins in the Old Covenant, allowing sinners to stand before him without their having provided an adequate ‘satisfaction’ of the demands of his holy justice (cf. Hebrews 10:4)”.[9]  That is, “God did not exact a full and immediate punishment for sin”.[10]  In the propitiation of Christ, both the justice of God and the mercy of God are on fully display, demonstrating God’s righteousness.  The redemptive sacrifice of Jesus means that no one can question God’s character.

v. 26: It was to show his righteousness at the present time, so that he might be just and the justifier of the one who has faith in Jesus.

First, notice that God’s righteousness is demonstrated at the present time by solving the dilemma existing since the garden of human sinfulness and God’s nature, which is both just and merciful.  Second, notice that the propitiatory sacrifice of Christ means that God can pronounce believing sinners ‘Not Guilty’ while retaining righteousness. Because of what he accomplished in Christ, God is both just (one who appropriately judges sin) and justifier (one who pronounces ‘NOT GUILTY’ over the one who has faith in Christ. God’s character is not compromised; the judging righteousness of God is displayed even in the justification of the one who has faith in Jesus.  Thus, ‘in the death of Jesus the saving and judging righteousness of God meet.  God’s justice is satisfied in that the death of his Son pays fully for human sin.  He can also extend mercy by virtue of Jesus’ death to those who put their faith in Jesus. By demonstrating his saving and judging righteousness, God has vindicated his name before the world.”[11]

So yes: rather than climbing a man-made stairway that goes to no-where certain, we can know have a relationship with God  based on certainty. Jesus has done the work for us; he invites us to receive it by faith.