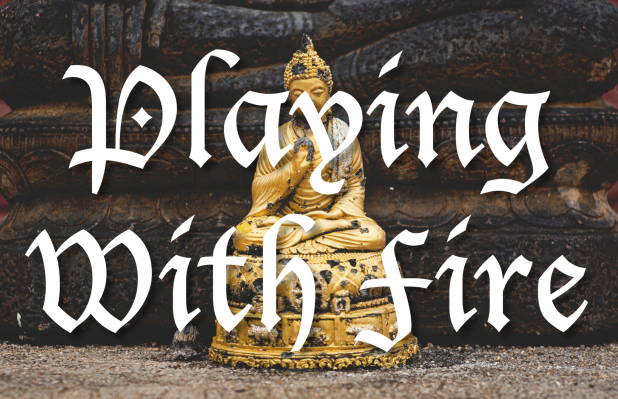 Natalie Portman was recently asked if she was proud of winning the Oscar for best actress. After all, that is the pinnacle of success in Hollywood. She answered: 'I do not even know where it is, perhaps somewhere in my safe. I have not seen it for a long time. I recently read the story of Abraham to my son which was about how dangerous it is to worship idols. This thing that drives Hollywood crazy - this gilded man - the Oscar - it's an idol, in the literal sense of the word. I have no plans to put it on display'. The Israelites also encountered the danger of worshipping idols. Unlike Natalie Portman, however, they failed to see the danger, and rushed head long in to a practice that ensared them.

How could the Israelites so quickly turn from worshipping the God who brought them out of Egypt to worshipping a golden calf they had created themselves? It seems they became afraid when Moses lingered on the mountain, and out of fear, knowing they needed someone greater than themselves, they created this golden calf to meet their own needs.

When we speak about idolatry, we have to remember that sin is not only a physical act of rebellion against God, such as lying or stealing, but it is also a matter of the heart. The physical displays of sin are the fruit of what has been birthed in the heart of a person (Matt. 15:10-20). In Scripture, idolatry usually refers to bowing down to a statue made of wood or gold, worshiping created things instead of the Creator. But idolatry can take on more subtle forms: a seeking of approval, security, power, pleasure, etc. We can diagnose the idolatry of our heart by examining the areas where the desires of our heart have turned into idolatrous demands (James 4:1-2).

Douglas Stuart asks: 'Why did the people want ‘gods who can go before us’? Were they not satisfied with Yahweh’s leadership during the past months, as he went before them day and night?

Next, we see the Lord tell Moses to go down and confront the people because of their distorted worship. God was angered by how the people exchanged His glory with an image of an ox (see Psalm 106:19-23). As a result, we see that idolaters deserve God’s condemnation.

The people chose to worship a created thing instead of worshiping the Creator God. Paul described this awful exchange to the Romans:

Claiming to be wise, they became fools, and exchanged the glory of the immortal God for images resembling mortal man and birds and animals and creeping things. Therefore God gave them up in the lusts of their hearts to impurity, to the dishonoring of their bodies among themselves, because they exchanged the truth about God for a lie and worshiped and served the creature rather than the Creator, who is blessed forever! Amen. (Romans. 1:22-25)

One of the spiritual realities of life is that we become like what we worship. This point is clearly illustrated in Exodus 32:7-10 (see also Ps. 115:4-8). They became dumb and spiritually lifeless like the idol. They became corrupt and nasty like cattle. Psalm 106 says that they exchanged the glory of God for the image of an ox that eats grass (v. 20).

Notice also that Israel became 'stiff-necked' and stubborn like unruly cattle (Exodus. 32:9). The text says that they turned away, like cattle, and they 'had broken loose', like cattle (Exodus 32:25). Hosea 4:16 says, “Like a stubborn heifer, Israel is stubborn.” Scripture refers to satanic influence in relation to idolatry in several passages.

We read later, “They sacrificed to demons that were no gods, to gods they had never known, to new gods that had come recently, whom your fathers had never dreaded” (Deuteronomy. 32:17). Likewise, Paul said in 1 Corinthians 10:19-20: 'What do I imply then? That food offered to idols is anything, or that an idol is anything? No, I imply that what pagans sacrifice they offer to demons and not to God. I do not want you to be participants with demons'.

God detests and rightly judges idolatry because of the spiritual pollution, bondage, and distortion it brings.

The psalmist wrote in Psalm 106:23, 'Therefore he said he would destroy them—had not Moses, his chosen one, stood in the breach before him, to turn away his wrath from destroying them'. What a remarkable statement about the mediatorial work of Moses, which points to the work of Christ.

First, we should appeal to God’s character and faithfulness in prayer. Notice how Moses appealed to the following:

Second, we must seek the will of God, not our own selfish desires, in prayer. Moses didn’t ask for personal glory here. God said that He would start all over with Moses, “I may make a great nation of you” (Exodus 32:10, emphasis added). This could have been flattering, but Moses cared more about the people fulfilling God’s purposes of making them into a great nation. We too should pray in line with God’s will, that is, making disciples of all nations, not desiring our own fame.

Third, we must believe that God answers prayer! This account in Exodus 32 is one of the best examples of how God responds to prayer. Those who have a high view of God’s sovereignty often struggle with prayer. But remember, God isn’t a math equation. He isn’t some abstraction. God is personal, and He responds to prayer!

In conclusion, note these three points: