Max Planck is known for presenting an absolute in a realm of knowledge marked by uncertainty.  It was his reaction to this new paradigm that brought Albert Einstein to say, "God does not play dice with the universe."  The idea that there are some things we cannot know - like the exact location and velocity of an electron at a given moment - this is disconcerting to a human intellect that assumes the entire universe can be figured out.

Initial resistance to Planck's ideas eventually gave way to grudging acceptance; Planck's constant (E=hv) was eventually recognised, and Planck's legacy gift to the world is quantum mechanics.  But Planck offers an astute observation regarding the process of change:  "New scientific truth does not triumph by convincing its opponents and making them see the light, but rather because its opponents eventually die, and a new generation grows up that is familiar with it."

In one sentence, Planck has identified the reason behind social acceptance of ideas previously deemed deviant. We live in age where the once prohibited is now not only accepted, it is condoned.  And this state of affairs is troubling for those who believe that the Bible offers absolutes in an age of uncertainty.

People don't mind the Bible's noble words like love, justice, and truth; these words are simply coopted and redefined according to the preference du jour.  The result is that Christians can talk about love and not be ostracised; what they can't talk about is the vast but targeted love God has expressed in Christ.

But if there is some flexibility given by contemporary culture to Christians regarding these retained connotation words, there is none regarding a vareity of ethical issues.  That is to say that when Christians assert a permanently relevant ethical code, this assertion is rigidly rejected.

But this isn't the main point.  Christians don't come under attack because someone leaps up out of the blue and says, "You're Christian ideas are wacko!"  No.  This is what happens: an idea or a behaviour once deemed deviant goes through the stages of revulsion, toleration, acceptance, and encouragement.  It eventually becomes a non-issue in the wider culture.  By the time it is widely accepted, some Christians are already agreeing with it.

Sexual ethics are a good example of how this works.  At the heart of the so-called sexual revoluation is that idea that any societally-enforced boundaries are a violation of human rights. And so in Germany people attack the idea that incest is wrong.  In France a man marries his step-mother. And in Spain the age of consent is only 13 years old. One has to ask:  who lobbied for the age of consent to be this low?  Surely not the fathers of daughters. For Christians, whether it is gender identity, how to define marriage, what constitutes grounds for divorce, and what sexual practices are deemed moral, we are tempted to take our cues from society rather than scripture.

Planck teaches us that change in accepted Christian orthodoxy and orthopraxy comes with generational change. As Christians grow up with a deviant idea or practice normalised in the society around them, the pressure mounts for the same behaviour to be normalised in the church.  For this to have happened, however, means that the previously guarded deposit of truth has been compromised.

This is why Paul challenged Timothy to lead the church in such a way that it would never cast off form its moorings.  For example:

The letters of 1st and 2nd Timothy abound with these kinds of references:  don't deviate, guard the deposit, stay the course, follow the pattern.  Why is Paul insistent on this?  Theologically, salvation depends on it (1 Timothy 4:16).  But also - Paul understood the pervasive power of social change.  Jesus had called his church to be salt; Paul didn't want the direction of influence to be going the wrong direction.

And if you think that 1st and 2nd Timothy are unique example, read 1 Corinthians 15:1-4, where Paul emphasises the historicity and continuity of the one true gospel. Though Paul established churches in different cultures that were able to thrive; contextualisation of the gospel never meant domestication of the gospel.

There are people alive today in places like the UK and the USA with living memory of a society more accepting of certain Christian norms.  Not that there ever was a golden age, but the point is this: a generation is growing up in the context of significant deviation in both orthodoxy and orthopraxy.  It is only by listening to Paul's advice to Timothy and clinging to eternal and unchanging Word of God that we can resist allowing the familiar to become the new normal.

Shipwreck happens (1 Timothy 1:19), but God offers us a higher way:

1 Timothy 3:14-16:  But as for you, continue in what you have learned and have firmly believed, knowing from whom you learned it and how from childhood you have been acquainted with the sacred writings, which are able to make you wise for salvation through faith in Christ Jesus. All Scripture is breathed out by God and profitable for teaching, for reproof, for correction, and for training in righteousness, that the man of God may be complete, equipped for every good work.

In other words, it is the constant of God's word that enables us to safely navigate the not untricky waters of social change percolating around us.  It gives us not only permanent and reliable truth (orthodoxy), but also permant standards for behaviour (orthopraxy).  Sailing the seas of uncertainty, this is the one way to avoid walking the plank into the oblivion. 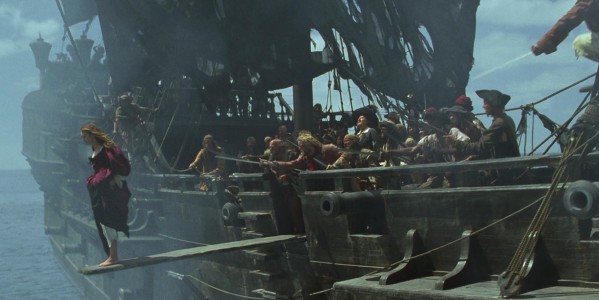