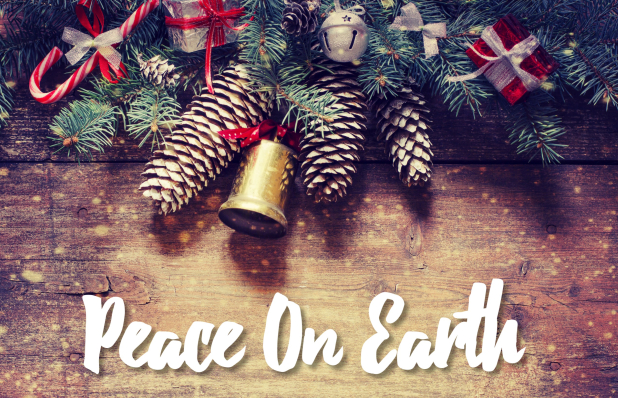 There are many words that remind us of Christmas: Grinch, Elf, and I’ll be home. Words like Bethlehem and Shepherds and Manger. One of the big words that describes the meaning of Christmas is FAMILY. At Christmas we get together with family, sometimes people we haven’t seen in a long time. Another word is TURKEY. This is the one time a year when lots of folk eat lots of turkey. PRESENTS is another word that comes up at Christmas. We all enjoy receiving and giving gifts.

One of the central words about Christmas is Peace. We find it in the words that were spoken by the angels to the shepherds:

Glory to God in the highest heaven, and on earth peace to those on whom His favour rests.

But when we look around at the world today, we might be wondering, ‘Where is the Peace?’ Just in 2016, we could look at the destruction of Aleppo, Boko Haram in Nigeria and war in East Ukraine. The world doesn’t look like it has very much peace.

But it’s easy for us to dismiss all of that and say it’s a long way away, and those places just haven’t learned how to do peace. And so closer to home, we could look at a very divisive presidential election in the United States or the Brexit vote here in the UK and realise that our society has many divisions.

But you may think, well, that’s at the level of national politics, we shouldn’t expect peace there. And so when we look at our own lives, we find that husbands and wives have conflict, parents and children have conflict, and brothers and sisters have conflict. Now, if you think your family is some kind of island of tranquillity in the midst of life’s challenges, I encourage you to take the road trip test. Pile your family into a car and drive to some destination that’s at least 8 hours away. Count the number of conflicts that happen.

So when we think about this word peace, it’s understandable that we put a question mark after it. At the global level, the national level, the family level, it seems that our lives are marked by conflict at every level. That’s why this word peace is so important.

The angels didn’t speak this word as a question, they spoke it as a promise. And this promise wasn’t something new. The promise of a Saviour who would bring PEACE was spoken by the prophet Isaiah 9:6:

For unto us a Child is born, Unto us a Son is given; And the government will be upon His shoulder. And His name will be called Wonderful, Counselor, Mighty God, Everlasting Father, Prince of Peace. This child who would be born would be known as the Prince of Peace.

He was going to bring a kind of peace that couldn’t be found anywhere else. Jesus himself said this: Peace I leave with you; my peace I give you.

What kind of Peace did Jesus have? What kind of peace does he give? First, when we look at the life of Jesus, it’s obviously not a problem-free life. The gift of peace that Jesus gives is an end to tension, it’s not an absence of warfare, it is not domestic tranquillity. Those things may be results of the peace he gives, but it does not consist of those.

The peace that Jesus gives is first and foremost peace with God. Father, Son, and Holy Spirit live together in eternal peace, sharing life and love in unhindered fellowship with each other. Through his perfect life, his death in our place on a cross, and his resurrection from the dead, Jesus made a way that sinful humans can be brought into direct and personal participation in the very life of God.

Jesus made a way that we can enjoy the very life, the love, and the peace of God. The apostle Paul described it like this: Therefore, since we have been justified through faith, we have peace with God through our Lord Jesus (Romans 5:1).

Through his life, death, and resurrection, Jesus has made a way that we can peace with God. And it all starts with faith in him. And it’s not something left to our cerebral, mental activities; it is something we can experience in life.

A number of years ago a community decided to have a contest to see who could paint a picture that best represented peace. Someone painted a beautiful pastoral landscape; someone else majestic mountains; someone else the peace symbole in flowers.

But the painting that won was of a storm: lightning and clouds and rain all against a rough terrain. It didn’t look peaceful. But if you looked closely, you could just make out a mother bird sitting in her nest in the cleff of the rock, dry, protected from the storm, and covereing her little baby birds. God promises us peace – not from life’s storms, but through them.

The common denominator with all of these people is that they responded positively to Jesus. So yes: PEACE ON EARTH isn’t only a promise, it’s a possibility. And it all starts by believing the promises about Jesus. He is the PRINCE OF PEACE. And if we will open our lives to him, we can receive the Peace He offers.