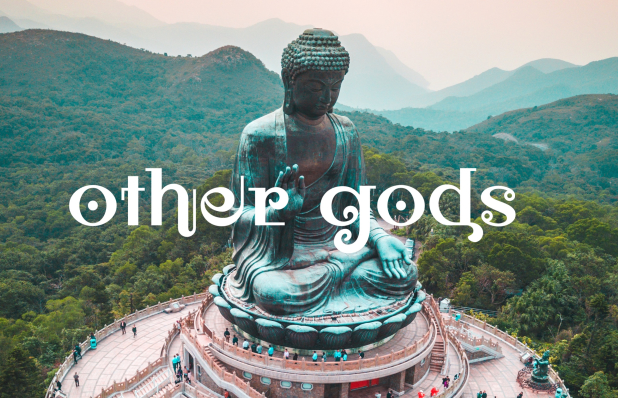 The first commandment is straightforward: 'You shall have no other gods before me'. At its deepest level, the call to follow Jesus is the call to recognise God's Lordship, turn from every alternative god, and submit to Christ as King. This is the place of true freed.

The northern kingdom of Israel is marked by a sad and pathetic history: founded on the principle of idolatry by Jereboam, who set up two gold calves and told Israel these delivered them from Egypt, no king who followed called the nation back to follow the Lord.

About Omri, for example, the author of Kings writes:

Omri did what was evil in the sight of the Lord, and did more evil than all who were before him. For he walked in all the way of Jeroboam the son of Nebat, and in the sins that he made Israel to sin, provoking the Lord, the God of Israel, to anger by their idols. 1 Kings 16:25-27

The phrase 'did evil in the site of the Lord' is code language for idolatry, or worshipping other gods. Omri was so bad that God says, he 'did more evil than all who were before him'.  It's one thing to sin; it's another thing to lead other people into sin. But his son went even further:

And Ahab the son of Omri did evil in the sight of the Lord, more than all who were before him. And as if it had been a light thing for him to walk in the sins of Jeroboam the son of Nebat, he took for his wife Jezebel the daughter of Ethbaal king of the Sidonians, and went and served Baal and worshipped him. He erected an altar for Baal in the house of Baal, which he built in Samaria. And Ahab made an Asherah. Ahab did more to provoke the Lord, the God of Israel, to anger than all the kings of Israel who were before him. 1 Kings 16:29-34

Not only did he worship other gods, but he broke God's law by marrying a non-Israelite who imported her gods (Baal and Ashteroth) into Israel. But only that, they killed the prophets of God and made Baal worship the state religion. So from God's perspective, Ahab was a pathetic loser of a king.

In God's grace, however, he didn't leave Israel alone, under the hand of a wicked king:

Now Elijah the Tishbite, of Tishbe in Gilead, said to Ahab, “As the Lord, the God of Israel, lives, before whom I stand, there shall be neither dew nor rain these years, except by my word.” I Kings 17:1-2

Notice, first, that Elijah was not a refined court official; he was a rough mountain man who knew and could stand before God. Second, Elijah decles a) 'God lives', and b) 'It won't rain until I say so'. These are both frontal attacks on Baal, about whom the people believed a) that he caused it to rain, but b) was sometimes subdued by the god 'death'. When it rained, Baal was winning; during the dry season, Death was winning. Elijah is saying, 'I don't think so. Actually, God is God, God is alive, and he controls the rain'.

After three years of no rain, Elijah, who has been in hiding, shows up, and challenges the Ahab/Jezebel religious estabslishment to a contest. Whose God/god can answer by fire? Of course, Baal, who is non-existent and no God, can't do anything:

there was no voice. No one answered; no one paid attention.

But God does answer - powerfully - by fire. By demonstrating his power and authority God was calling his people back from idolatry. But before we dismiss this as simply about somebody else, let's do a personal inventory: what's in our own heart?

Idolatry is any failure to obey the first commandment: you shall have no other gods before me. All our failures to trust God wholly or to live rightly are at root idolatry—something we make more important than God. There is always a reason for a sin. Under our sins are idolatrous desires.

In biblical terms, an idol is something other than God that we set out heart on, that motivates us, that masters and rules us, or that we trust, fear, or serve. So even if it is not the false god of another religion, for us, it can be a functional idol.

Our life issues are always about the Lordship of Christ in our lives:

Our greatest freedom is found in submission to Christ as Lord and king. No one else can do what He has done for us.