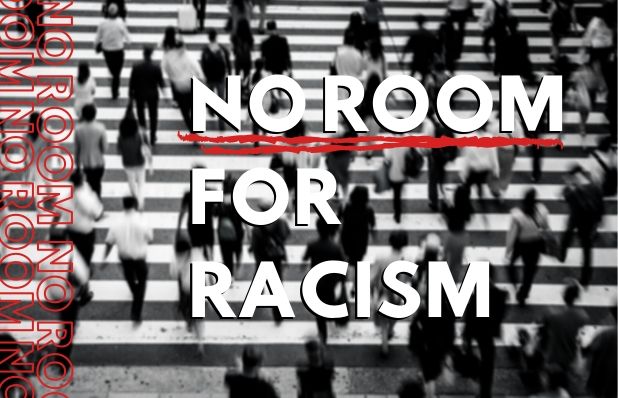 My heart aches for the people of colour who daily bear a burden I've never felt. And it is frustrating that, in 2020, it remains necessary to affirm that that there is no room for racism. But in the wake of the George Floyd tragedy, it is obligatory to say something. We  should feel pain with those who have experienced pain; we should mourn with those who mourn; we should unite and work together to eradicate the vile virus of racism.

Now is an easy moment to be anti-racist; when everyone you know is participating in Black-out Tuesday, it’s not difficult to join the chorus. And this may provoke hesitation to enter the conversation and say something, lest we be accused of ‘me too-ism’. But the dangers of saying nothing are less than those of saying something: in the words of Martin Luther King, Jr: ‘In the end, we will remember not the words of our enemies, but the silence of our friends’. And so silence is not an option.

On paper, the United States believes that 'we hold these truths to be self evident, that all men are created equal'. And while many do genuinely believe this, we cannot ignore the palpable pain being experienced by the black community; we cannot turn away from the lived experience of intimidation, segregation, and discrimination.

What happened to George Floyd is inexcusable, but let’s not kid ourselves: it’s not like there was suddenly more racism in the USA last week. These events have reminded us – not just about the worst cases, but that racism is often lingering underneath the surface of polite smiles and gracious hellos. The sinful human heart is a repository of fear, mistrust, and discrimination. Unfortunately, Christians are not immune to these kinds of attitudes, and so - while we should work to build a racism-free socity, we must absolutely and resolutely affirm – there is no room for racism in the church; there is no room for racism amongst God’s people.

The word racism is itself a loaded term with a cluster of meanings. Racism can refer to the belief that some races are superior and others inferior; it can refer to the belief that different races possess different behaviour traits; it can refer to prejudice or discrimination on the basis of race. It’s easy to look at the George Floyd episode and think, ‘I’m glad I’m not racist like that unhinged policeman!’. But rather than letting ourselves off the hook, this is a good moment to pause and reflect and listen.

My best friend at university was an African American. He was smarter than me, a better athlete than me, better looking than me; I had no room for the delusion that I possessed any superiority based on white-ness. But as an African-American, he experienced an ‘other-ness’ I couldn’t relate to as a member of the majority race. Once we were walking down the street, and we both commented how we both needed a haircut. I noticed a barber shop and said, ‘How about this place?’ He laughed at my naiveté; although I had never seen a black person in any of the barber shops I had ever been to, it never occurred to me that blacks got their hair cut in different places.

It’s true that the American version of racism, rooted in the 17th-century perspective propagated to justify the slave trade, is particularly painful. Slavery required presumed inferiority in an attempt to justify the unjustifiable. Unfortunately, after slavery has been abolished and racial discrimination made illegal, the influence of prejudicial perspective remains a perpetual problem.

For those of us living outwith the American context, it's important to remember that this isn't just an American issue. Yes, this is a British issue too. Even in nations where the American legacy of slavery does not shape race relations, sensitivity to the challenges faced by immigrants is appropriate. We need to realise that our brothers and sisters bear a burden of otherness: they may be graciously engaged and warmly welcomed while facing invisible barriers to a place at the table. As someone commented, it's not that white people don't have difficulty, it's simply that the colour of their skin doesn't contribute to it.

Racism manifests everywhere; the broken human need to feel superior finds someone to look down on. I grew up hearing ‘Polack’ jokes; I’m not sure what the Poles had ever done to the Americans to attract this racist humour, but somehow they became the stereotype of ignorance. Years later when I lived in eastern Europe I discovered that the Poles looked down on the Ukrainians, and the Ukrainians looked down on the Moldovans. Fallen and broken humanity tries to lift itself up by putting others down.

The very first Christians had to face this issue head on. In Acts chapter 6, the first conflict in the first church happened when food distribution occurred along ethnic lines. Social connections gave Jerusalem-based Jews an upper hand in receiving aid; Hellenistic Jews were missing out. Peter and the apostles acted proactively and solved the problem.

All the churches planted by Paul were mixed – not mixed like African and European – but mixed with Jew and Gentile. Some of the Jews wanted to keep ‘separate but equal’ churches; Paul says, absolutely not; he challenged the churches like the one in Ephesus to embrace a ‘no racism’ policy.

This is what he writes in Ephesians 2:

For he himself is our peace, who has made us both one and has broken down in his flesh the dividing wall of hostility … that he might create in himself one new man in place of the two, so making peace, and might reconcile us both to God in one body through the cross, thereby killing the hostility. Ephesians 2:14-16

Christ bore in his body the sins of people from everywhere; not only are we united to God through him, but the hostility and alienation towards each other has been removed. Jesus is the one who brings healing where there has been division. In Christ, Jew and Gentile, Nigerian and Scottish, Pakistani and American – through his blood, we are brought into one body.

This is what I love about Centrepoint. Here in Scotland, in a nation that’s 96% white, we are a multi-ethnic, multicultural church where people from every nation, every tribe, every language are welcome. We can't assume that just because we're a diverse congregation that we've won; we all have blind spots. This is a time to listen and emphathise, to weep with those who weep (Romans 12:15).

We're not there yet, but our vision is motivated by the beautiful picture of what heaven is like. This is what we read in Revelation:

After this I looked, and behold, a great multitude that no one could number, from every nation, from all tribes and peoples and languages, standing before the throne and before the Lamb, clothed in white robes, with palm branches in their hands, and crying out with a loud voice, “Salvation belongs to our God who sits on the throne, and to the Lamb!” Revelation 7:9-10

Yes, this is a beautiful picture, but to live it now requires focus, diligence, and effort. Our appropriate posture must be more than simply avoiding attitudes of superiority and actions of discrimination. Jeremiah 22:3 prompts us to a proactive action, commanding us to ‘Do justice and righteousness, and deliver from the hand of the oppressor him who has been robbed’. People have been robbed of justice, and God calls us to do justice and righteousness. This is an active, not passive, posture.

God has called us to be a picture – a model – a testimony – of what it looks like when people from different nations gather under the banner of Christ’s name, setting aside racial, ethnic, and national origin differences, to love God, love each other, and to share that love with a hurt and lost world. If it were easy, everyone would be doing it.

We need to work to root out racism everywhere. But before pointing fingers, let's check our own hearts. Let's begin with us and make sure that our church is a racism-free zone. Our world needs us to get this right. By the power of the Holy Spirit, we can walk in love and unity, affirmation and forgiveness, respect and understanding.

We are Centrepoint. This is who we are; this is what we do.