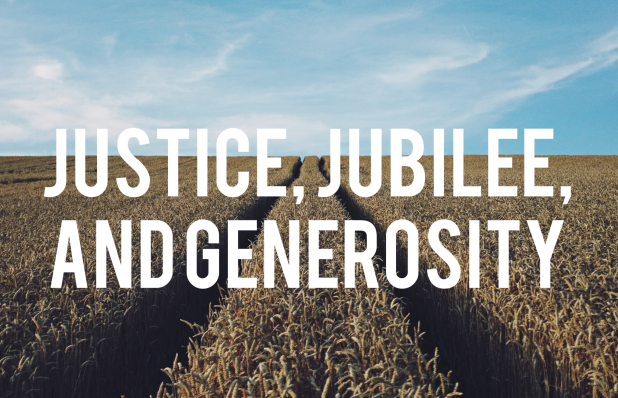 When Jesus launched his ministry in Galilee, one of his first preaching points was the synagogue in Nazareth where he had grown up. As typical for a sabbath, he was handed the scroll, which happened to be Isaiah, and he read these words:

The Spirit of the Lord is upon me because he has anointed me to proclaim good news to the poor. He has sent me to proclaim liberty to the captives and recovering of sight to the blind, to set at liberty those who are oppressed, to proclaim the year of the Lord's favour (Luke 4:18-19).

When he sat down, he announced that 'today this Scripture has been fulfilled in your hearing'. If we look closely at this text it gives us an expansive understanding of the mission of Jesus: good news for the poor, liberty to the captives, sight for the blind, and liberty for all who are oppressed. That's all really good.

The key phrase in this passage is verse 10: each of you shall return to his property and each of you shall return to his clan. To understand the signficance of what's described here, we have to remember that when Israel came into the Promised Land, it was divided equally between all the families. Everyone ended up with a share of the natural resources and had a means to provide for their family.

But in the course of life, bad things happen: a bad harvest might cause debt to incur, covered by leasing out part of the land; in exteme cases the entire holding may be relinquished to cover debts, or a person might become an indentured service to pay off the debt. Bad things could happen.

Once every fifty years, the economic reset button was hit: land reverted to the family owners, and people returned to their clan. Thus, those dispossessed from land came to be able to use it for their own family again, and those who had been indentured servants were released. Possessions, such as flocks and finances, and houses in walled cities, did not revert to original owners - they could be bought and sold forever. But agrarian land - the natural resources that provided for the families - were restored.

This restoration did not simply mean the right to farm the land and provide for their families; it also meant full participation in the economic life of the nation. This economic participation involved three tithes (a tithe is 10%):

When people were dispossessed from their land, they were unable to contribute and rather had to live on the generosity of their neighbours through practices like gleaning (Deuteronomy 24:19). But when they returned to their land, they became givers, not receivers. By tithing the produce of their hard work they were able to help fund worship, feasting, and social welfare.

God has given us an immense treasure in Christ; this prompts us to give genersously to God. 'Each one must give as he has decided in his heart, not reluctantly or under compulsion, for God loves a cheerful giver' (2 Corinthians 9:7). The word cheerful in this verse is the Greek word hilaron, from which we get the English word hilarious. God loves someone who gives with hilarious delight because they know that as much as they give, it's only a fraction of what God has given them in Christ.

In summary: Jesus came to proclaim the year of the Lord's favour, a spiritual jubilee in which we are restored to the happy land of our relationship with God. This positions us for active participation in God's purposes, including gratitude-based generosity. Every time we give, every moment we share with those in need, every week we set aside a tithe and give it to God to fund his worship, we are participating with Christ in his kingdom purposes.

And the fun bit is that we get to do all of this with hilarious joy.