How's It Going to End? 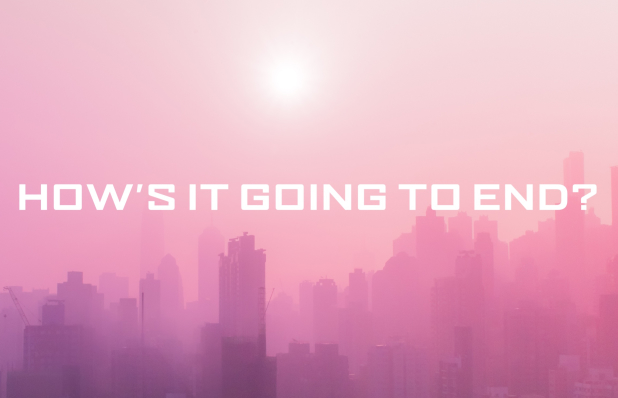 The story at the heart of this chapter is a dream of Nebuchadnezzar, King of Babylon, in which he sees a series of successive kingdoms, all ultimately conquered by an eternal kingdom.

This all happens within the story of Daniel's life: he and his friends come to Babylon as captives but remain faithful to God; as a result of Daniel accurately stating and intepreting Nebuchadnezzar's dream, these four young Jews are promoted to positions of prominence in Babylon.

Daniel's story unfold with the story of the Bible, the story of God's unfolding redemption of humanity and restoration of creation. So what's so important about this dream?

The head of the statue was made of pure gold, its chest and arms of silver, its belly and thighs of bronze, its legs of iron, its feet partly of iron and partly of baked clay.

Daniel went on to interpret this part of the dream (Daniel 2:37-43): Nebuchadnezzar, as king representing Babylon, was the head of gold, and would be followed by a succession of kingdoms. Some of these are identified in Daniel 9 (Medo-Persia, Greece), and Bible scholars generally agree the legs of iron represent Rome. There is not agreement regarding the feet - some see this as an extension, with varied form, of the legs (Rome); others see it as something different in the future. But the big point of the dream lies elsewhere, because all these kingdoms are facing the same fate: they will all be wiped away.

While you were watching, a rock was cut out, but not by human hands. It struck the statue on its feet of iron and clay and smashed them. Then the iron, the clay, the bronze, the silver and the gold were all broken to pieces and became like chaff on a threshing floor in the summer. The wind swept them away without leaving a trace. But the rock that struck the statue became a huge mountain and filled the whole earth.

That's a fantastic, amazing, heart-throbbing picture: this incredible, glorious, dazzling statue reduced to a heap of dust, scattered by the wind. And rock that grows into a mountain that fills the entire earth. Here's the interpretation (Daniel 2:44):

In the time of those kings, the God of heaven will set up a kingdom that will never be destroyed, nor will it be left to another people. It will crush all those kingdoms and bring them to an end, but it will itself endure forever.

This rock from heaven is the kingom of God, inaugurated when Jesus came the first time, to be consummated when he returns. In Matthew 13:31-32, Jesus describes the kingdom of God like a seed planted in the garden that eventually fills the entire garden. It's here, but not fully; it's growing, and it's coming. And in the end - it wins. Completely. Evil is eradicated, and God's kingdom of righteousness is established.

There are many details in this chapter worth further exploration, but I want us to observe three key lessons central to this passage:

1. God is sovereign over kings and the affairs of this earth.

Our experience of the world is contingent; things feel like they happen randomly, without rhyme or reason, and the economic, political, and socio-cultural turmoil in the world prompts us to wonder if God is in control. But take heart - he is. And many verses in the Bible assert this truth:

Job 12:23: He makes nations great, and he destroys them;
he enlarges nations, and leads them away.

Psalm 75:7: But it is God who executes judgment, putting down one and lifting up another.

Isaiah 40:23-24: He brings princes to naught and reduces the rulers of this world to nothing. No sooner are they planted, no sooner are they sown, no sooner do they take root in the ground, than he blows on them and they wither, and a whirlwind sweeps them away like chaff.

God is in control to the degree that he spread the Greek language through the conquests of Alexander the Great's so that the the gospel could be enscripturated in the language. And he used the Romans to build a road network across their empire for the gospel to travel. Regardless of what you see in the temporary fluctuations of human history, God is sovereign and in control.

2. God is omniscient, knowing not only past and present, but also the future.

Because we are finite, it is difficult for us to grasp the infinite-ness of God's knowledge. God knows everything - including the future. Many verses in the Bible teach this; here are a couple:

1 John 3:20: For if our heart condemns us, God is greater than our heart, and knows all things.

Isaiah 42:9: See, the former things have taken place, and new things I declare; before they spring into being I announce them to you.

It is because God knows the future that we can trust him with it.

3. Don’t be discouraged by this present darkness.

Empires will rise and fall until the end, but the glorious kingdom of God will surely come, and all the wickedness of earthly regimes will cease. And realise that God promises to destroy all evil:

Revelation 20:10 And the devil, who deceived them, was thrown into the lake of burning sulfur, where the beast and the false prophet had been thrown.

Not only that, but he's going to do away with all unpleasantness:

Revelation 21:4 There will be no more death or mourning or crying or pain, for the old order of things has passed away.

Now this seems incredible for us because the only life experience we have is marked by unpleasantness; all around us, we see evil, and the idea that it will ultimately be abolished seems remarkable. But it's quite credible, because God promises to destroy the devil, evil, and all those associated with darkness.

How's it going to end?

But what does all this mean for us today as we try to live life faithfully? Very simply: