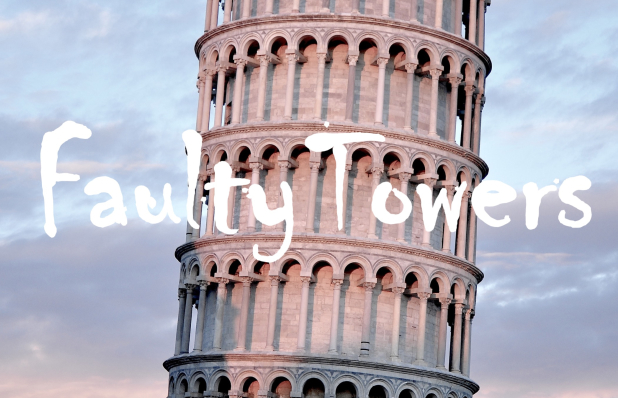 The Leaning Tower of Pisa is famous for its lean. Without the outside intervention of specialists over the last 100 years, the tower may have collapsed like one in Pavia in 1989. The Pisa tower is very well built - and beautiful. But the problem lies with its foundation. Built on a combinantion of mud, sand and clay, this was an insufficient foundation for such a glorious building.

He sets the stage in v. 46: “Why do you call me ‘Lord, Lord,’ and not do what I tell you?".  Jesus asserts his authority over the lives of those who claim to follow him. Ih short - he's Lord. That means he's the king, the boss, the commandant. Yes, he loves us, and in other passages of scripture he asserts that love in deep and profound ways. Here, he is asserting his rulership over our lives.

To say 'Lord, Lord' is to affirm verbal allegiance to Jesus. And that's good - plegding faithfulness is a good move because it draws us towards action. But CALLING Jesus Lord isn't enough ... it's sumbitting to his instruction where real discipleship begins.

Jesus defines what Lordship means: doing what he says. This is not complicated - it's quite simple. But in that simplicity, there is a deep challenge. There are two points of difficulty with this.

Both of these are insufficient. To follow Jesus well, we have to submit to his Lordship and do what he says.

In v.47, Jesus describes the three steps the lead to a blessed life:  Everyone who comes to me and hears my words and does them, I will show you what he is like'. Note the sequence:

What is this person like? Jesus tells us in v. 48: he is like a man building a house, who dug deep and laid the foundation on the rock. And when a flood arose, the stream broke against that house and could not shake it, because it had been well built.

Again, note the steps: digging, digging deeper, laid a foundation on the rock. This person has a strong life because they have astrong foundation. And remember - what is the foundation they are building on? Very simply: Doing the words of Jesus.

Sometimes we learn from negative examples, and that's the teaching technique Jesus uses in his last example. He's trying to say, 'Don't do this!'. What's the this? Listening to Jesus, but not obeying. In verse 49, Jesus describes what that person is like: But the one who hears and does not do them is like a man who built a house on the ground without a foundation. When the stream broke against it, immediately it fell, and the ruin of that house was great.

The ruin of this house is great. The word in the Greek for 'great' is 'mega'. This is a mega collapse - a mega ruin. This house may look great on the outside. But on the inside, it's foundation is a disaster, and it's coming down. What is its foundation? Anything other than the word of Christ.

If you don't want your life to be a faulty tower, build on the strong foundation of God's word.