An Encounter With God 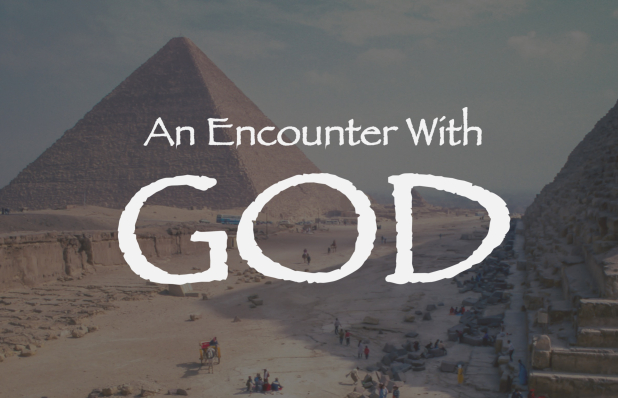 The life of Moses unfolds in three phases:

Most of Exodus is concerned with how God got his people out of Egypt and their experiences at Sinai. But none of this happened without Moses, whose spiritual journey is the primary focus in the first few chapters.

After having a conscience awakened by discovering the plight of his people, he decides to investigate their situation. When he sees an Egyptian mistreating a Jew, he kills the Egyptian. But rather than being welcomed by the Jews, he is mistrusted, and when Pharaoh finds out, Moses flees to save his life. As a forty-year old wannabe deliverer, Moses had noble ambitions but went about it in all the wrong way.

What do you do if you are a fugitive of justice? Moses' answer was to hide in a faraway land for forty years. We could call this the 'private period': Moses returned to civilian life, hoping he could just forget the past. But running from the past does not subvert God's purposes, and God had a purposes for Moses, personally, and for his people, corporately.

Sometimes we get so far from God and his purposes that it takes a dramatic encounter with God to get us back on track. And that's what happened to Moses. It's important to recognise that, according to Exodus 3:7, God knows the pain of his people.

Whenever you feel like God doesn't know, that he doesn't care, that his promises seem to distant, he promises in his word rather that he see, he does know, and he does care. And that's why he engaged Moses in a dramatic way with the burning bush.

This is God's perpetual self-designation: He is the only One, the holy One,  the eternal One, the creating One, the acting One.  God is utterly God, defined by his sheer God-ness. But as this story indicates, he is not some deistic, watchmaker, God out there who is only distantly involved in human affairs: he hears, he sees, he remembers, and he knows.

And this is why encounter with Him is so important. Some of us face the pull of the palace in which the spirit of this age calls and beckons and seduces and entices us. Others are hiding in private,  far, far away from God - because of something we've done, or has been done to us; something we've observed, some grievance or guilt or perspective.  Drawn by the palace or drawn to to the private, we all live in danger of missing out on God's purpose.

The need for all of us is to have an encounter with God. Moses had this because he paused to note the bush that did not burn. God has spoken to us in Christ and now speaks to us in his Word and through His Spirit.

Remember, the YES of God in Christ is bigger than the devil's no. God's purpose for your life will prevail!